A somewhat disorganised collection of results from the 2016 World Individuals Debating and Public Speaking Championships hosted by Shady Side Academy in Pittsburgh, drawn mostly from Tweets and various facebook pages.

On a largely unrelated note, it appaers that WIDPSC 2017 will be hosted in Sydney, Australia.

Major health warning, both in the fact that the underlying sources haven’t been verified, and I may well have made mistakes in translating those results into this post. Any errors are my responsibility alone, and my apologies in advance. That said, here goes:

Some of the many vital and often underappreciated volunteers

We now have the top 50 overall rankings and top 20 for each category, released by WIDPSC 2015 online at their facebook page. These confirm that the Break-night/AIDPSC order were largely correct, though I had anticipated fewer tied rankings.
As always any errors are mine and you might want to check the original document to be 100% sure of results.

END_OF_DOCUMENT_TOKEN_TO_BE_REPLACED

Thanks to Joy Pamnani of Maryknoll Convent School for delivering these in real-time via the SCMP Young Post twitter account. Updated with more details thanks to Brian Wong (Island School) via the WIDPSC 2015 Facebook Page. The overall rankings seem to suggest that the AIDPSC/Break-night order were largely correct or at least closer to the actual results.

To my knowledge the Grand Final was recorded and will be uploaded at some point. If it is a high-quality recording then it will take a little longer to process and edit, though I suspect it will be worth the wait. 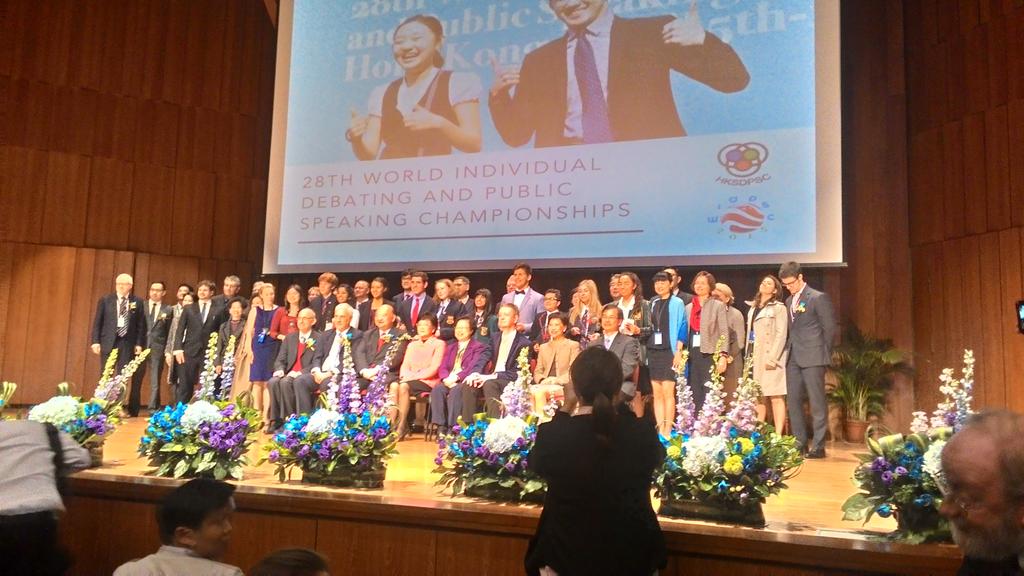 This time direct from the mouth of the lion (eg. the official WIDPSC 2015 facebook page) which can be located here. Full list after the break.

Philip Balson (United States) becomes the only person this year to make multiple Grand Finals, being scheduled to appear in both Impromptu Speaking and Debating. Philip Balson previously came in 14th in persuasive speaking and 12th in debating at WIDPSC 2013 in Durban, and was 3rd overall at WIDPSC 2014 in Lithuania.
Canada’s dominance in the Finals is less apparent in Grand Final positions, with 4 of the 12 spots. South Africa follows closely behind with 3 of the Grand Final positions, Australia and the US with two a piece and hosts Hong Kong with the final Grand Final spot.

In other interesting but probably insignificant observation, there are another 3 of this year’s finalists who, like Philip, are at their third WIDPSC (since WIDPSC 2013). These are Natalie Ganzhorn (Canada), Jacob South-Klein (England) and Brendan Allan (South Africa). Samantha Starkey (Canada) is at her fourth having began at WIDPSC 2012 in Brisbane, Australia.

Assuming that generally speaking those in the Grand Final were higher ranked following the prelims unfortunately does not shine much light on the race for overall best speaker. Although statistically this might suggest the YP order is more accurate, the reality is that the AIDPSC order is hardly any different (weighted 60 and 65 respectively).

The Grand Finals will be at DGS later today (Saturday) with teams departing on Sunday.

END_OF_DOCUMENT_TOKEN_TO_BE_REPLACED

Sadly haven’t been able to take part in any capacity despite WIDPSC 2015 being held in Hong Kong, but in a grateful break from Finals revisions, we have the 2015 Finalists courtesy of the SCMP Young Post, all neatly listed on their website here.

The full list of finalists are towards the end of this post. I don’t have the time to attempt a full analysis but here’s some initial observations based on the list of finalists. As always, any errors are my responsibility and no-one else’s. A useful metric to keep in mind is that there are 57 final spots for grabs this year.

There are only 4 people in 2 finals each, these being Emma Potvin (Canada), Imaan Kherani (Canada), Ji Min Kang (Hong Kong) and Peirce Dickson (Canada). We therefore have a tail end of 27 people in 1 final each.

Only 6 countries have any finalists. Canada come out overwhelming on top with 24 final spots, a little under 50% of them. Next behind them are South Africa on 9 finalists and Australia on 8 finalists. Hong Kong and the United States each have 7 final spots and England snag the last 2.

It’s notoriously hard to predict overall rankings based only on the list of finalists, not the least because we are missing data for the unknown category/categories for just about everyone who aren’t in the Finals of all categories. It is possible that the YP list is in order, or that the powerpoint shown last night and detailed here by AIDPSC is in order, or quite possibly that the tabbsters are messing with us (in all seriousness I hope this is what happened) and neither is the correct prelim order.

The AIDPSC order seems to be more consistent if we take into account the number of finals that a particular person made (eg. the top 7 are those 7 people who made 3 or more finals). Even then it should be noted that I’ve given the ‘missing’ category quite a low weighting (that is I’ve assumed they will all performed reasonably consistently and were close to breaking). So how well these 7 do in the unknown category relative to each other will be the deciding factor.

In any event, it seems likely that a Canadian will walk away with the top prize, and perhaps not that surprising given that they have 4 of the 7 that made 3 or more finals. The closing ceremony is on Saturday (tomorrow) with the Finals currently ongoing.

END_OF_DOCUMENT_TOKEN_TO_BE_REPLACED

The 2014 World Individuals Debating and Public Speaking Championships, once again hosted by Druskininkai in Lithuania, concluded on the 29th of April 2014. A tab has not been publicly published, and WIDPSC still remains one of the least-covered international level tournaments. Hopefully, with Hong Kong set to host WIDPSC 2015 this will change for the better. Thanks also to Brian Wong (Team HK – WIDPSC 2014) from whom many of these results originate.

Whilst there is a lack of official results (I’ve cobbled together as much of what I can find online), there is certainly not a lack of photos or videos, with the organisers very efficiently making them available at https://www.facebook.com/widpsc2014. A video recording of the WIDPSC 2014 Grand Finals is embedded at the bottom of this post.

Any errors in the information included below are mine and mine alone. Given that I was not present in Lithuania, and haven’t been to a WIDPSC in around 5 years these results are highly likely to contain inaccuracies. Please do not rely on these as definitive information in any manner.

All speakers from HK unless otherwise denoted

Other WIDPSC 2013 videos can be found in my earlier post. These are only from the Grand Finals hosted at the Moses Mabhida Stadium.

END_OF_DOCUMENT_TOKEN_TO_BE_REPLACED

The overall speakers tab for the 2013 World Individuals Debating and Public Speaking Championships hosted in Durban, South Africa are included below. These results are taken from the WIDPSC Facebook Page.

A compilation of videos from the World Individual Debating and Public Speaking Championships in reverse chronological order.

The videos of the Grand Final have been moved to a separate post for simplicity’s sake. These are videos of the rounds and of WIDPSC 2013 as a whole, created by the Clifton Film Academy at Clifton School, Durban, South Africa.